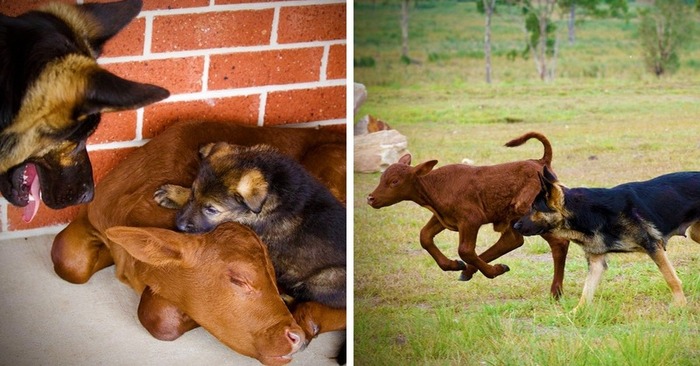 A small lonely calf left without parents was taken away by farmers.

Santa Gertrude’s little calf, left without parents, was taken by 52-year-old Coral Elgie and her husband, 61-year-old Wayne. They live in New Italy. This is a village located in the Australian state of New Wales and where terrible fires have recently raged.

The bull was named Buddy, but not a couple took custody of him, but their two and a half year old German shepherd named Bud. At that time, she had just given birth to 11 puppies and Buddy became her full-fledged child at number 12.

This is Bud and Buddy – two dogs. One dog by nature, and the other self-proclaimed.

Bud is two and a half years old, she is a purebred German Shepherd. Sweetie is a caring mother. Buddy is 6 weeks old and an orphan. Bud’s owners picked him up and gave him up to a shepherd dog. She was only happy about this and raised a real kind creature from Santa Gertrude’s calf.

Growing up in a canine family, Buddy adopted the dog habits.

The baby wags his tail, plays catch-up with puppies and hugs them in his sleep, like a full member of their family.

Mr. and Mrs. Elgie have their own farm with all the accompanying ungulates, but Buddy is different because he was raised like a dog.

“I think he considers himself a dog. He looks at the other cows in the pen, but prefers to sit on the veranda. He is very happy with his family members, which are people and dogs.”

Bud and Buddy get along very well.

He really likes Bud’s attitude and loves her.

She constantly cares for him, licks him, cleans his eyes and is constantly with him.

The cute calf has also caught on with Wayne’s two youngest children: Bella, who is 12, and Lawson, who is 10.

Buddy runs alongside the kids while they ride their bikes and play with Bella. Buddy differs from real dogs in his appetite – he drinks about 4.5 liters of milk daily. And the “baby” weighs already 38 kg (and when he grows up, he will gain at least 600 kg!).

But Coral and Wayne emphasize that Buddy is part of their family and will never be considered meat.

Cutie Buddy is not destined to go to the slaughterhouse, and he will always be our great friend.

This reinforces the long-held theory that it’s not just humans who think dogs are incredibly cool creatures, but other animals also recognize this. Ask Buddy and he will bark in agreement!