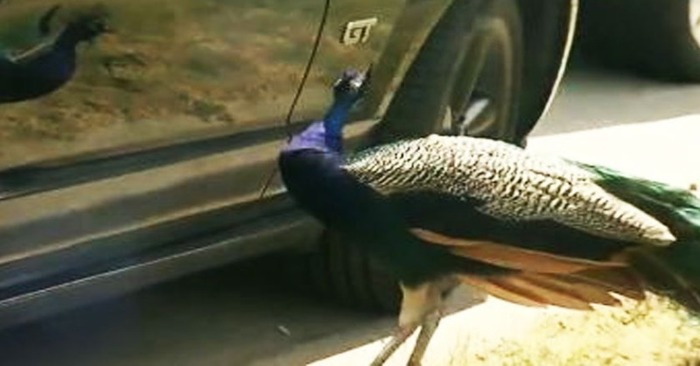 The city authorities are trying to solve this problem, but so far nothing has worked.

Peacocks are wonders of nature that you can admire without stopping for a second until they start to open their mouths and terrorize those around them. Approximately the same story happened to the residents of Canada in the cities of Vancouver and Surrey. The fact is that the mating season has begun for peacocks, but this is not the worst thing. During this period, the birds become very aggressive and attack their rivals, who are … afraid when they see their own reflection in the cars of local residents.

In such cases, not only the vehicle suffered, which was furiously pecked and scratched with clawed paws, but also the physiological state of people, because the birds screamed all night long! The city authorities are trying to solve this problem, but so far nothing has worked. It got to the point that the situation was considered emergency and unforeseen. Local residents really hope that the authorities will still be able to resolve this misunderstanding and the locals will get enough sleep.

Journalist Sarah McDonald arrived at the scene of the “crime” to film the situation, but she was also attacked.

There’s a peacock problem in this #Surrey neighborhood! The birds catch themselves in the reflection of vehicles, and end up scratching the cars. Neighbours say they’re also extremely loud. City officials say they’re speaking with experts to determine next steps. pic.twitter.com/nTAOZr4vJ8

The peacock situation was also covered by a local TV station, who was interviewed by a local resident who received a $1,000 fine for trying to save his property.

A homeowner in Surrey is facing a $1,000 fine after illegally cutting down a tree in which a group of peacocks have been nesting for more than a decade: https://t.co/Q1HLbWMM6J pic.twitter.com/nArxZmJHfe

The fact is that Parm Brar cut down a tree on which a peacock’s nest was located for many years. The action was declared illegal, for which the man was fined. Moreover, homeless peacocks began to continue their disturbing behavior more often. However, the man does not regret what he did, because the birds have moved away from Parma’s house at least a little.

This situation caused a strong reaction in social networks.

And here is another reasonable point.

“Don’t you think it’s better for cuties to live in their natural habitat?”

And this is a comment from a girl who does not have to live next door to peacocks.

“I don’t see any problem here. This place would be heaven for me to live in”.

Some users have suggested starting a hunting period.

And yet, most people agree that the best place for birds to live is somewhere far away from people.

The situation would be quite funny if not for the damage caused by these creatures. It remains to be hoped that the local authorities will be able to deal with this emergency caused by our feathered creatures as soon as possible!