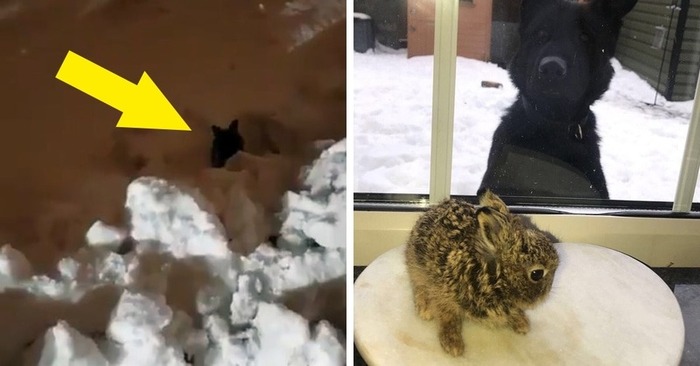 A tiny furry cutie was found on the territory of Dublin airport.

In the UK, the raging bad weather caused by Storm “Emma” caused the cancellation of thousands of flights, but the workers of the air harbor had to get nervous not because of this, but because of a hare that somehow appeared on the runway. . The tiny fluffy cutie was found on the territory of the Dublin airport by the K-9 team, which, of course, could not get past the animal without helping the cutie. He was rescued and taken to a warm place.

The rescue operation was even filmed.

A special rescue this morning by one of our Airport Police. This little fella was taken to safety & given food and heat. We’re happy to report he’s safe and well. #BeastFromTheEast #Snow #BabyRabbit pic.twitter.com/uyP78y5BOH

Users were very interested in the fate of the baby, so the airport service kept everyone informed.

Hareport News: the rescued baby hare is getting some TLC with our colleague who found it & his family. He’s a she, they’ve called her Emma & will release her back into the wild when she’s back to full health. Thanks so much to @mccaheyleahhxo for the picture. #HareEmma pic.twitter.com/rHi5ZL3eU4

Cutie even comes to visit the airport workers.

Hareport update: rescued hare Emma safe, warm and well this morning with Lou, one half of the K9 team who found her. #HareEmma pic.twitter.com/yBq1irvX8B

Now the hare is being fattened so that it can return to its natural habitat.

Hareport Latest – Emma the baby hare is thriving. Here she is enjoying her first feed after being rescued @DublinAirport. We’ll release her back into the wild as soon as she’s ready. #HareEmma #DublinHareport pic.twitter.com/Xj7QWfBbaT

“The hare is doing great. Here he enjoys his first feeding after being rescued. As soon as it’s ready, we’ll release it back”.