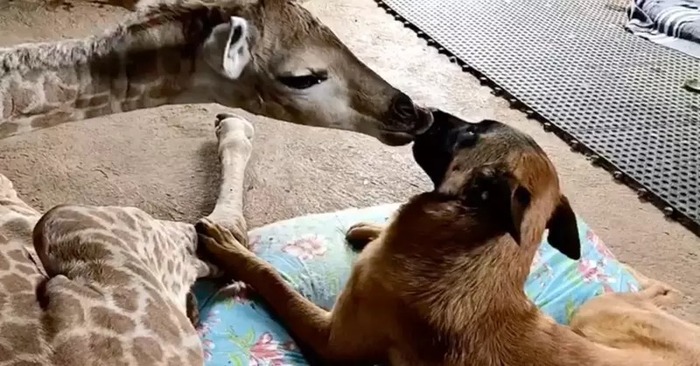 This dog and an orphaned baby giraffe are winning hearts all over the internet.

When it comes to love and care, the animal kingdom knows no bounds. We have seen so much kindness and incredible friendship between animals of different species.

And yet, it’s always touching when such a beautiful story goes on the air. This time, dog and the orphaned giraffe are winning the hearts of the entire internet. Mother abandoned adorable giraffe Jazz moments after giving birth. It was only a matter of hours before the helpless creature died.

Luckily, he was found by a farmer who turned to a rhinoceros orphanage in Limpopo, South Africa, for help. When he was brought here, the baby’s condition was still very unstable. However, Jazz proved to be a fighter and eventually succeeded. “For the first 18 hours, the baby was in a coma, but began to show signs of awakening,” the shelter’s website said in a statement.

“He managed to get up several times with the help of our guardians, and tonight he walked with very unsteady legs. Baby giraffes are known to be very industrious and find it hard to sit on a bottle”. But the Jazz wouldn’t have made it without Hunter, the Belgian Malinois puppy.

Shortly after the baby giraffe was brought to the shelter, the dog began to take care of him as a guardian parent. It’s amazing how dogs show a special feeling when it comes to comforting other animals in need.