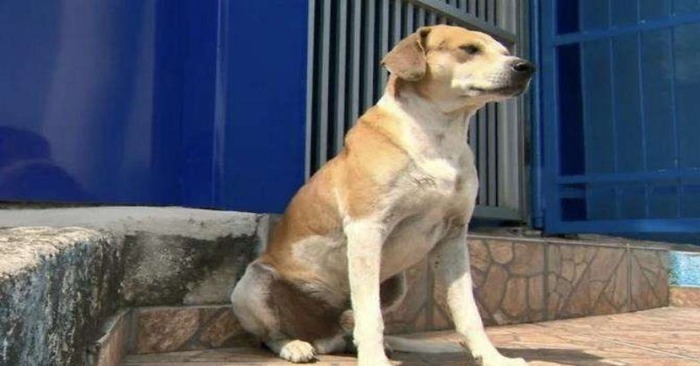 Next to the clinic all this time the father of the newborn puppies was sitting.

The fidelity of the dog is striking, both fidelity to people and to his soul mate. In general, raising puppies is the role of their mother. But there are situations when fathers are also involved in the process and do everything so that their offspring grow up in safety and satiety.

This interesting incident took place in a Brazilian town called Cariasica. A little over 300 thousand people live here. There are several veterinary clinics in Cariasica, and it was in one of them that these events took place.

Surveillance cameras installed near the clinic recorded a dog that could not get out of the entrance. In the morning she waited at the door, as if realizing that there are people who can provide her with proper assistance.

Local veterinarian João Aureu Rodriguez de Oliveira decided to find out what happened to the animal. The examination showed that the dog is in the last stages of pregnancy and is already preparing for the birth of puppies.

A cutie named Amiga ended up in a clinic without owners. She probably never had them: the dog was without a chip and without a collar. The dog successfully gave birth to six healthy puppies in the veterinary clinic.

But the amazing events did not end there. The second dog was sitting next to the clinic all this time. Doctors suggested that this is the father of the puppies, who was patiently waiting for his wife.

Veterinarians have decided that releasing dogs and their offspring back into the street is dangerous because it could cost the lives of the little ones.

Therefore, now Amiga, her children and her lover are in the clinic. All animals are healthy and are now undergoing adaptation. They are going to find caring hosts for the cuties.