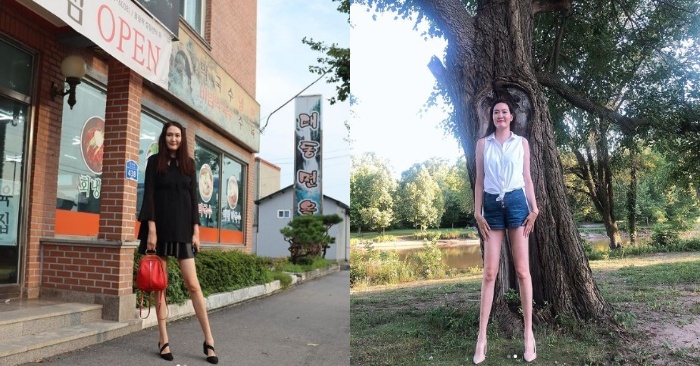 The girl always stands out from the crowd, because of her height.

Rentsenkhorloo Bud is a 29-year-old native of Mongolia. At the moment, the girl lives in the USA and always stands out from the crowd, because her height is as much as 205 centimeters! For this feature, Ren was included in the rating of the owners of the longest legs: in this list, Bud takes second place after the American Maci Currin. But Rentsenkhorloo is not going to compete with the leader of the top: she is quite satisfied with the current second position.

The girl shared that her legs, which are now 134 centimeters long, have caused her real suffering all her life. Of course, Ren easily overtook her classmates in running competitions and took items from the top shelves. But there were many more cons. In the first grade, Bud was the height of a teacher – 168 centimeters. Then the girl dreamed of wearing cute baby clothes, but nothing suited her.

Now with the choice of clothes and shoes, everything is also not easy. For example, Ren, with her 46th foot size, is very difficult to find suitable models: there is simply nothing in her homeland in Mongolia and even in South Korea. And in America, there were difficulties before, but now the girl orders non-standard shoes in online stores.

Ren said that with her growth, living in Asia was a real torment, but also in the United States, difficulties arise. Bud used to often not go through doorways, hit the jambs and hit the ceilings. But now the girl has adapted, got used to her features and even became a successful model for a brand that produces clothes for tall people.

Rentsenkhorloo is often mistaken for a model, and the girl is flattered. She admitted that she was pleased to hear such opinions. Bud accepted herself for who she is, and even decided that being tall is actually wonderful, because such people are always noticeable and stand out from the crowd.