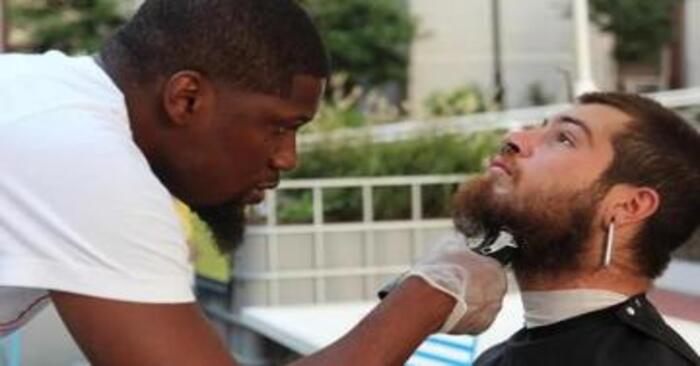 Soon, hairdressing returned to the life of this kind man.

Brannon Jones from Philadelphia had a pretty good job. The man once worked as a hairdresser, and later mastered the profession of a stylist, starting to help people dress beautifully and properly.

But soon hairdressing returned to his life again. It happened after Brannon saw a homeless man on the street, and, deciding to buy him some food and water, he talked to him. This conversation impressed the man so much that, having come home, he began to think about how he could help homeless people.

And suddenly he came up with the idea of ​​a mobile hairdresser. Brannon began to travel the streets of the city and offer haircuts and shaving services to the homeless. Many of them agreed and were very pleased with the result. And for some, the updated look even motivated them to try to find a job again. And these attempts were successful.

And the hairdresser was soon in for a surprise. Sean Johnson, the owner of a barbershop chain, contacted him and offered Brannon to become the manager of one of his salons. But the man turned down the offer.

After thinking, Sean called him again, this time giving him the opportunity to cut hair at the barber shop for the homeless a few days a week, and the rest of the time to receive ordinary clients.

Brannon really liked the idea, and now the institution is very popular.